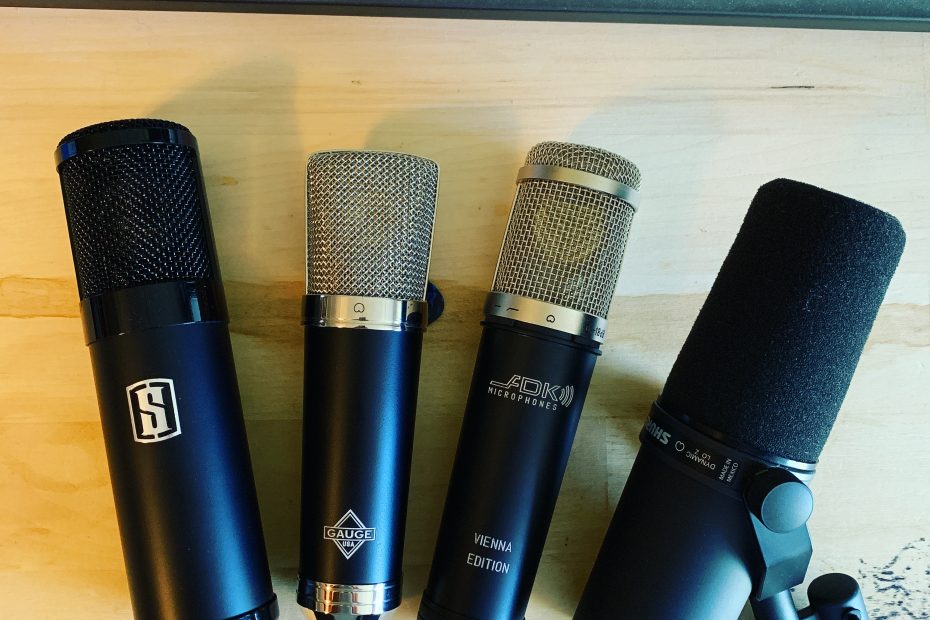 This post has some affiliate links in it. These help me make a couple of extra bucks to buy and test more stuff and keep writing, without costing you any extra.

Ok, so I realize that “affordable” is a very relative term.

However, the most expensive mic in this photo cost me $700 (Slate VMS) and that included the preamp, since it was on sale at the time.

I also think the software makes it a decent bargain too.

(FYI: I’ll probably shootout the different mic models on the VMS too…)

And regardless of your budget, none of these are high end.

We already know from pioneering home recordists like Graham and Joe that you don’t need fancy gear to make great sounding recordings, so I decided to make it my mission to see if one of these mics suited my vocals better than any other.

I already discussed this one earlier, but I picked it up because it was on sale and I knew it was unlikely that I would be building a locker of vintage high-end mics anytime soon!

I got this mic at a Taxi Road Rally, because the people behind Gauge are Taxi sponsors, and they were selling these for killer deals.

Clearly based on the Neumann.

More on this mic here. (Not an affiliate link)

I figured I’d throw this in there since it seems to be what everyone is using in videos (at least on camera).

It’s a dynamic, so it doesn’t capture all the detail of the other mics…

But in some situations that can be a good thing.

When I’m recording with the worship band at church and I don’t want too much guitar bleed in my vocal mic it’s excellent.

Famous for needing lots of preamp gain, I used a Cloudlifter CL-1 AND added 9db of gain via mixtool to match levels with the other mics.

This one is sentimental to me.

This is the first LDC that I ever bought for the purposes of recording my own music.

After doing as much research as I could on what mic would be best for my vocals, I went for this one.

This is definitely not something I’m an expert at, and I was fairly pressed for time so I won’t say that this is a definitive test.

I just took a line from a song I’m getting ready to record that had some notes that represent the range of my vocals and sung it into each mic.

To keep things standardized, all 4 mics are plugged directly in to the first preamp on my Presonus Studio 192 with the level set to 30db.

The only exception to this is the SM7B which, as I mentioned, had 9db of gain added with the Mixtool plugin in Studio One.

I’m using a JZ Microphones JZ-PF (though this may be overkill as a pop filter, who knows?), that is spaced about 5-6″ from the mic, with me backing off another 4-5″ from the pop filter.

Then I sang the line into the mic, swapped it for the next mic and did it again for the 4 times necessary to test all the mics.

And here’s what I came up with.

Each individual clip is about 15 seconds, so only 1 minute is required to hear all the mics.

And also individually, in case you want to listen to one over and over!

Mattie – The Recording Songwriter · Mic Only Shootout – Mic A

Mattie – The Recording Songwriter · Mic Only Shootout – Mic B

I’d love to hear what you think!

As much as may have wanted to do endless takes and add some reverb/compression/tuning, I DIDN’T!

These are the raw, dry takes with these mics to attempt to get some idea as to the actual characteristics of the mics themselves.

I’m curious to hear what you think about the test, the results, what mic you liked best, and/or how to do it better in the future.

I’ll be picking one of these mics to record my vocals for some worship music very soon, so I’ll be able to get a more in-depth idea of whether or not I made the right selection very soon!